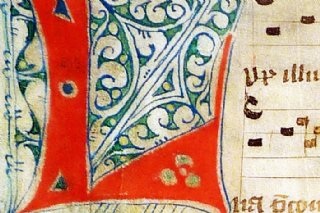 The sequentiary here referred to as the Saint Olaf Sequentiary was probably produced in Trondheim in the fifteenth century. It consists of 14 single fragments from six leaves (ca. 29 x 20 cm), and contains 11 sequences, among them two sequences for Saint Olaf, Lux illuxit letabunda and Salutamus te rex ave (formerly known as Predicasti dei care).

The sequence was a popular chant genre in the Middle Ages in general and in Norway in particular. It formed part of the Mass liturgy during feast days, following the Alleluia. The sequences underwent considerable stylistic changes from their appearance in the ninth century to the late sixteenth century, when they were all but eradicated from the liturgy.

The most exciting results for Norwegian sequence research in a long time came through Gunilla Björkvall’s identification of two fragments in Stockholm as part of the Saint Olaf Sequentiary (also known as Seqv 13). The opening line from an "unknown" sequence for Saint Olaf in one of the Swedish fragments is in fact the missing first strophe of the Olaf sequence Predicasti dei care, as illustrated in the reconstruction (see pp. 19-20). That one of the Swedish fragments provides the lost beginning of Predicasti was discovered in connection with this reconstruction for fragment.uib.no in august 2017. The Olaf sequence actually opens Salutamus te, rex, ave, qui solvisti nos, Olave, a vinclis perfidie (We salute you, king; Hail to thee, Olaf, who released us from the shackles of heathendom).

A leaf from this manuscript, NRA Lat. fragm. 986,8 (the leaf containing Saint Olaf's main sequence Lux illuxit), has recently been included in Norges dokumentarv, the Norwegian branch of UNESCO’s Memory of the World register (see pp. 11-12 in the reconstructed manuscript).