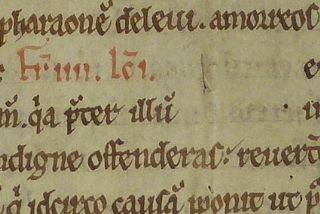 Norway, middle of the twelfth century

This office lectionary is the only one to provide us with two full weeks of liturgical service. These are the two final weeks of Lent, which are also called Passiontide. The texts chosen for this time are especially interesting, since they prepare the audience for the coming of the Church’s principal feast Easter. Accordingly, they pick up themes of repentance, preparation and resurrection.

The lectionary is quite ordinary, with a moderate page size of 315 by 218 mm and no decorative elements. The initials are lacking throughout, but red rubrics were provided by the scribe himself. The parchment is thick and uneven, and there are several holes in the surface, where the skin of the animal had bruises. The scribe, on the other hand, is proficient, and he makes hardly any mistakes. He might have worked in a smaller institutional context, for instance a city parish church, where they produced manuscripts for their own services.

The fragments had been used to bind account books in the south-east of Norway. From 1602 to 1613, the annual account books of Verne had been bound using fragments from the same part of this lectionary. This binding initiative must have been local, and it is restricted to the time of governour Peder Madsen Laxmand. Two fragments from a different part of the lectionary had been attached to bailiwick account books from Follo 1613 and 1614. It seems that after Peder Madsen’s death in 1613, the remainder of the Passiontide lectionary was sent to Akershus castle as part of his estate, or passed on to nearby Follo.