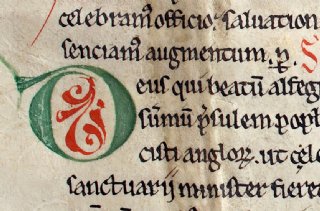 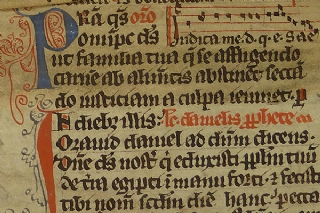 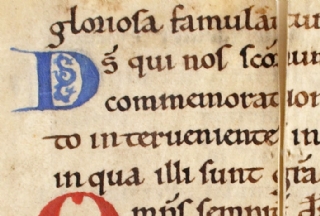 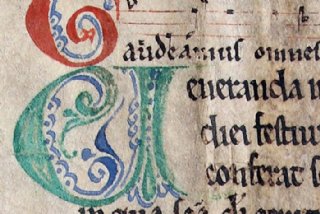 Norway (Trondheim?), second half of the 12th century

The feast for the English saint Alphegus is one of the unusual features of a fragmentary missal from the 12th century. Alphegus (or Ælfheah) was the archbishop of Canterbury and was taken hostage by the Danes in 1012. When he refused to pay ransom, they made him a martyr. Saint Alphegus had very modest appeal outside England, and this missal is the only known reference to him in Norway.

The Saint Alphegus missal is pieced together from 41 small to medium size fragments in the National Archives of Norway. The content includes parts of Christmas, Lent and Easter. The liturgist Lilli Gjerløw registered a number of fragments from the missal in her files as Mi 75. The fragments were used to bind accounts from Trondheim, and it is in this case not unlikely that the missal was also written and used in Trondheim.

There are three different scribes present in the transmitted fragments. The music and the coloured initials are very distinct and recognizable. One of the characteristics of the manuscripts is the relaxed manner in which the scribes related to the ruling, the lines and the measurements. It is a useful reminder that codicology is far more than an ‘art of measurement’.

This missal, named after its post-medieval provenance, was written in England or France at the end of the thirteenth century. The surviving fragments contain chants, prayers and Bible readings for use in the time from Sexagesima Sunday (the eighth Sunday before Easter) to the Holy Week. Several of the reconstructed leaves follow one another directly. This is especially clear in the case of the epistle “Libenter suffertis”, which starts on the bottom of page 6 (folio 2v) and continues directly onto the next leaf (folio 3r, or page 7).

The reconstructed missal is about 28 cm tall and 18 cm wide, the writing distributed in two columns on each page. The initials alternate between blue with red flourishes and red with blue flourishes, while red is used for the rubrics, the foliations (“paginations”), the line-fillers, and the musical staves, as well as to highlight capitals within the text. The script, at least in the running text, seems to be the work of a single scribe, writing in an elegant Gothic hand.

The fragments from this missal were taken from four different account books, all from the same area in Northern Norway (Nordland and Vesterålen), the dates of the accounts following each other directly: 1626, 1627, 1628, and 1629. This suggests that the missal, or a dismantled part of it, was kept in the same place and used there as binding material over several years.

Norway (Trondheim?), first half of the 12th century

This missal is a curious one, since it is very diverse and variable in style and content. The different units, registered as three different missals by the liturgist Lilli Gjerløw (Mi 24, Mi 25 and Mi 64), are connected by some ‘awkward’ secondary rubrics. The current state of the manuscript would suggest that it was not finished with rubrics and initials. These have in some places been supplied more or less randomly or as needed. The original manuscript was ca. 28 x 20 cm.

One of the characteristics of the manuscript is the English Saint Edward, whose feast day was celebrated 18 March. Edward became king of England when he was thirteen, and was murdered already as a sixteen-year-old by his enemies. Although he did not die for his faith, he got status as martyr. As far as we know, Edward the martyr was not generally worshipped in Norway. Neither was the French Saint Symphorian of Autun (22 August), who is also celebrated in this missal. In both style and content the influence is certainly ‘Anglo-French’.

There seem to be five different scribes, and two different rubricators in the manuscripts. One of the rubricators seems to have added at least some of the initials.  The fragments were used to bind accounts from either Vardøhus or Trondheim, and it is not unnatural to connect also the making of the manuscript with Trondheim in this case.

Unknown origin, mid to second half of the 12th century

The Easter Sequence Missal is a fine and puzzling missal from the mid to second half of the twelfth century. The fragments come from both from the general feasts of the church year (temporale), primarily the weeks leading up to Easter, and from the saints’ feasts (sanctorale). The saints’ celebrations are Peter and Paul in June, and the Assumption of Mary in August. It could be that the temporale and the sanctorale celebrations were combined in one book. There are also fragments from various masses, such as the masses for dead.

Two fragments by the same scribe contain a sequence, Fulgens preclara, for Easter Sunday. Is it from the same book, or a separate sequentiary? If it comes from the same book (which is most likely), was the sequence placed with the rest of the liturgy for Easter or together with other sequences at the end of the book? The time and place of binding could be an argument against it. But since other fragments come from the part of the book directly preceding Easter Sunday (Passion Sunday and Palm Sunday), it is not unlikely that the sequence was integrated with the other liturgy of the church year.

Because of its ‘English-but-not-quite’ appearance, Norway has been suggested as the place of origin, but the missal could also have been made somewhere in England or the Channel area such as Flanders.

There are 23 fragments left from this missal which was probably written in England around the middle of the twelfth century. The book was originally ca. 35 x 26,5 cm, in two columns, with simple, but fine initials in red, blue and green.

The missal has received most attention for its Good Friday liturgy. According to the liturgist Lilli Gjerløw, who named the missal Mi 12, its content is a combination of the older directions for English monasteries (the Regularis Concordia  from ca. 970) and the Decreta Lanfranci, issued a century later by Lanfranc, archbishop of Canterbury (1070-1089). Lanfranc’s instructions were primarily designed for Christ Church, Canterbury, but were also taken up in other, associated monasteries. Our missal essentially follows Lanfranc, but has retained the Good Friday prayers and the burial of the Cross from the older liturgical practice (see fol. 8).