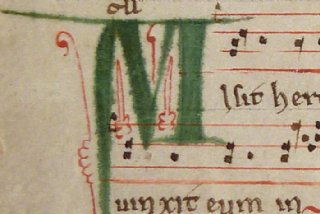 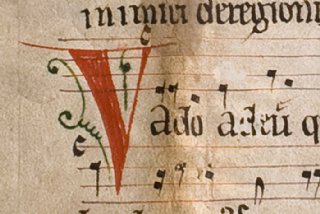 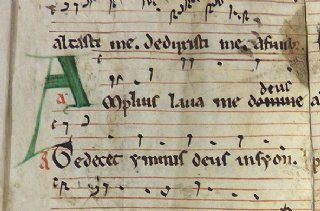 An antiphoner from Nidaros 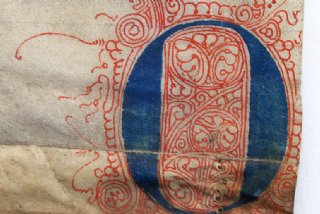 The Saint Edmund Antiphoner is one of four manuscripts known to have been written by the Homily book scribe, who was active in Bergen ca. 1200-1225. His most important work (as his nick name suggests) is the Old Norwegian homily book, the oldest preserved book in the Norwegian vernacular. The scribe was probably a cantor either at the Cathedral chapter in Bergen or the Augustinian house of St. John across the harbour.

Among the many feasts described in this antiphoner is also that of the English Saint Edmund, celebrated 20 November. Saint Edmund, king of East Anglia, is said to have been killed by Danes in 869, and later became one of the most important saints in medieval England.

It was the liturgist Lilli Gjerløw who named the antiphoner after Saint Edmund, because of the presence of his office. The celebrations of several other saints are described in the antiphoner, among them the feast for Saint Olaf 29 July. Since Lilli Gjerløw’s time, Gisela Attinger has identified two more fragments from the manuscript, increasing the number of fragments to 35.

The so-called Saint Lucia Antiphoner is very closely connected to the Saint Edmund Antiphoner, since the Homily book scribe in Bergen was connected in the making of both books. In the Saint Lucia Antiphoner he entered rubrics, initials, musical notation and corrections, while three other scribes wrote the text itself. This book is the product of an institution where at least four people worked together to make a book, although some may have been under training.

The Saint Lucia Antiphoner contains music for the celebration of various parts of the church year: Advent, Christmas and Easter. Saint Lucia is the only saint present on the remaining fragments of the book.

The significance of this antiphoner was discovered by Michael Gullick and Gisela Attinger, who both identified the Homily book scribe’s participation in the making of the book: Gullick in the one surviving initial, Attinger in the musical notation.

An antiphoner from Nidaros

The remnants of this antiphoner were used as binding material for tax lists from Trondheim 1627 and 1628. It is possible the book was used in the diocese of Nidaros during the Middle Ages – perhaps in the town of Nidaros/Trondheim itself. The antiphoner has survived in eight fragments, taken from three leaves, containing chants for the Wednesday, Friday, and Saturday per annum (so-called ordinary time, i.e. not part of a proper season), and for the Second Sunday after Epiphany.

The book gives a general impression of being made for use and not for display, having no decorations apart from initials in green, red, and blue. The musical staves are drawn in light orange; the same colour is used for rubrics.

The original width of the leaf was probably around 200 mm, with the width of the written space around 140 mm. The book was therefore not one of the large antiphoners often used for collective celebrations of the Office, but was modest enough in size that it may have been practical for travelling. The script and the use of green initials point to an origin along the coast of Northern France – perhaps the antiphoner was bought there by a travelling clergyman, who then brought the book to Nidaros with him?

Some books have a complex history, both while in use and after their destruction. This antiphoner was probably written in Flanders or France in the fourteenth century, but dismantled in Denmark for the parchment to be reused in the binding of accounts. Parts of the book were reused in Denmark, other parts were brought to Norway and reused there in the years 1611-1619. To get this far in the reconstruction has taken several decades and has involved a number of scholars.

The remaining 39 fragments are from in all 14 leaves which originally measured ca 50 x 38 cm. The leaves contain liturgy for moveable church feasts as well as for saints’ feast. It is therefore likely that this antiphonary combined the temporale and sanctorale rather than split them into two separate parts.

One of the striking features of the book is the decorated intials. There is a hierarchy of two levels: the higher one with penwork initials in red and blue, the lower with black letters decorated with phantasy-figures, touched with yellow.