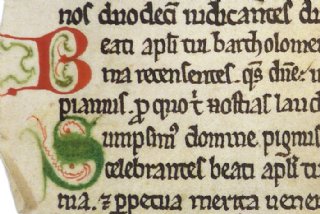 This little portable breviary-missal is one example of the close contacts between Norway and Iceland also concerning liturgical books. This book was probably written ca. 1250, either in Iceland or by an Icelandic scribe in Norway. It must have been a very practical book for the priest who owned it, measuring only ca. 20 x 14 cm and containing all the liturgy for both Mass and the Canonical hours. The Icelandic Breviary-Missal was most likely dismembered in Stavanger ca. 1650.

The five remaining leaves of the book contain songs with music notation, prayers and lessons for the latter half of August: the Assumption of Mary (15 August), the Octave of Saint Lawrence (17 August) and the feast for Saint Bartholomew (24 August).

Seeing that the liturgy was according to the use of Nidaros, more fragments from this particular book would most likely have supplied material now lost, in particular for the celebration of Saint Hallvard (15 May) and Saint Sunniva and the Selja Saints (8 July). In addition, since it contains several examples of the “sequence” genre, it would have been an invaluable source to the tradition and use of sequences in Nidaros.